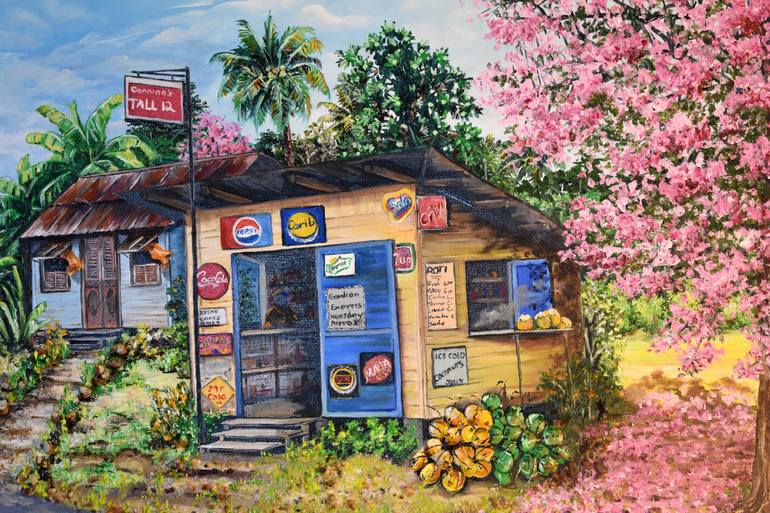 By Stephanie Ramlogan on October 2, 2020

Between tall shelves of textbooks and classroom equipment, two little heads bobbed relentlessly as they hatched a devious little plan. On the far right of the University Bookshop, short wide racks, colored red from the Chinese Mango and yellow from the plantain chips, lured their attention. Pink-frosted Kiss Cakes and shiny silver wrapped Bobbie chocolates gave the stoic room a warm feeling. The purple Digestive packs, and the Devon biscuits in blue, brought life to the otherwise clinical feel of this store where the children’s mother worked, and where they spent every boring afternoon when school was over.

Adanna was older, two years wiser, and braver than the impressionable Khalil. There was no question that she was the brains and he would be the brawn, or whatever word you would use to refer to the muscle of a seven-year-old in a cashew nut heist.

“It has to be the cashews!” Adanna barked, still barely breaking the security of their hushed voices with only the rackety air conditioning to mask their conversation.

Their mother would never let them have a pack of cashews. Actually, she would never let them have anything. Cashew nuts, as any highway shopper knows, is the most expensive by far. The honey roasted peanuts do not count, because that is not real honey. There’s definitely brown sugar mixed into that batter. The salted peanuts are a fine contender when you only have singles and don’t want to break a ten. The “fresh” is far too ital,  far too pure for two curious children straddling the lines of crime. It had to be the cashews.

The risk was that the cashews were kept at the other end of the rack, furthest from the bookshelves. Their mother was at the front counter organising the receipts. Khalil would be in her plain sight and the snack rack was off bounds. They needed a distraction. A couple students walked in. A bushy ponytailed Indian girl, clutching her Spanish dictionary and her chubby dougla friend, spilling out of his jeans and hardly covered by a much too small striped t-shirt. Adanna observed them from behind the pencils. They went straight to the Languages section and called out to her mother.

“Do you have the 1994 edition?” the girl asked, gesturing toward a large hardcover book almost as big as her dictionary.  “We only seeing the old one.”

Their mother looked up from behind her glasses, paused, and with a subtle sucking of her teeth, pushed herself back on the rolling chair. She swivelled around and hopped off to attend to the customers. Adanna could not believe their luck! The plan was to wait for a distraction that would be convincing enough to get their mother to move from her station. Then Khalil would dart toward the snacks, grab a pack of nuts, and shove it into the pocket of his very wide khaki short pants. He was yet to grow into the new school uniform, but for what he lacked in leg, they made up for in hiding space. Adanna shoved him and his eyes opened wide.

Before she could shove him harder, the phone rang and their mother quickly rushed back to the front to answer it. They both stopped and retreated to the trenches. The missed opportunity was to be vindicated at the next viable moment, without hesitation or fear. Adanna pinched Khalil, scolding him on his lack of manliness and highlighting how much more of a “man” she was than him. Stuttering and holding his throbbing ear, he retorted that he was not a girl like she insinuated. He would even get two packs of cashew nuts to prove it.

Another group of teenagers walked in. Adanna did not take her eyes off of them. She instructed Khalil to keep his eyes on his own mission. The students came to use the Xerox machine. They did not need any help. Shortly after, a professor walked in. Adanna knew he was a professor because he wore a white shirt that held pens in the front pocket. His hair was grey, he wore metal-framed glasses and carried a book bag strapped to both shoulders. They had spent enough time on campus to be able to identify his type with ease. Perhaps he would distract their mother by holding her in a long conversation. Old people love long talk. Sadly, he only came for his umbrella that he accidentally left behind the day before. He was out the door faster than the ones who came to make photocopies.

“How allyuh so quiet? What mischief you making?” their mother called out as she packed away the stack of receipts she had been working on.

They were always reminded that children were to be seen and not heard yet when they obeyed, there was suspicion.  They couldn’t win. It was as though adults expected them to be bad, even when they were not. Adanna grabbed her copybook out of her school bag, and replied: “I showing Khalil the two times table.”

Their mother appeared at the mouth of the aisle. “What about the Social Studies project you had to do on Noor Hassanali?” she asked. “Come, let me give you a book to look through.”

She turned around and expected her daughter to follow. Adanna glared at Khalil. This was their last chance and he better not mess it up again. She walked closely behind her mother to the other end of the bookshop where there was a small table and chair for her to work on her research. Sweat rolled down her ribs while she feigned paying attention to the pages where her mother placed bookmarks. She could not hear her brother. Did he make a run for it? Could he swiftly and quietly enough unhook the cashew nut packs from their clips without attracting attention? Then, there was a crash.

Their mother ran over to see what Khalil had gotten into. Adanna panicked, knowing that her brother could never keep a secret and that his lying capabilities were not yet as sharp as her own. Oh, why did she not just do this alone? Why did she have to involve this incompetent little goody two shoes? She scuttled over to do damage control, concocting an explanation for why he might have been in the forbidden area. Khalil stood in the middle of a pile of pencils and pens, with his palms in front of him like he was surrendering.

“I bounce my head by accident when I stand up and the pack of pens fall on me,” he blurted.

“I’ll help him clean it up, Mummy,” Adanna chimed in, as their mother exhaled deeply and nodded.

It was almost closing time and she could not be fussed to quarrel with the boy at this late hour. The two children got to their knees and swept up rolling stationery with their hands. Adanna was anxious to hear if he had completed the mission. She gave him a look, and through the nonverbal communication siblings have with their eyes, he understood and nodded. He pulled out from each pocket, just halfway, a bag of cashew nuts each and smiled. Adanna was humbled. They giggled thinking about their loot and whispered about eating it when their mother went to take her evening nap at home. He then pulled a whole bag out to hand it to his sister. She put it into her pocket and froze.

“What is that you have there?”

The store owner, Mr. Singh, had walked in without them noticing. They were so caught up in their premature celebration that they had abandoned all caution. He was pointing at her skirt. Adanna prepared to produce her pack of nuts with shame and guilt blinding her. Would it cost their mother her job because she brought these two little thieves with her to work? How much licks would they get and how many wares would they have to wash to make up for this?

“Oh gosh, it’s an ink stain from one of these pens. Look how it dirty up your school skirt!” Mr. Singh realized what it was that he saw.

The fear drained from Adanna slowly. As her brain began catching up with reality she replied, “No, Mr. Singh. That was there from before.” She had almost confessed! Mr. Singh smiled at the children before making his way to the counter. Khalil dropped the pencils he was holding and put both hands on his face. Adanna rubbed her forearms to relax the hairs that were on end.

“That was a close one!” Khalil breathed. “We nearly get catch!”

“Nearly get catch doing what?” their mother said, standing behind them with her head cocked and eyebrow raised.

Stephanie’s writing career started in 2012 with her Caribbean Fashion Blog NoMoreFashionVictims.com. As a fashion stylist, she was commissioned by various magazines and blogs to add her voice to style stories and designer interviews. In 2018 she moved to NYC to further her career in fashion. Instead, the move from Trinidad to New York inspired a deepening curiosity into the nuances of immigration and the subtleties of Caribbeanness that make it special.

After being short-listed for the BCLF Caribbean Nunez Writer’s Prize in 2019, and winning it in 2020 with the short story, The Case of the Missing Eggs, Stephanie is now dedicated to uplifting Caribbean stories through both fiction and nonfiction, and dissecting the impact of the heritage on the contemporary diaspora.

Cashew Heist was inspired by a true story about one Stephanie’s oldest and best friends, who conspired with her younger brother to steal a pack of nuts from a shop when they were kids.